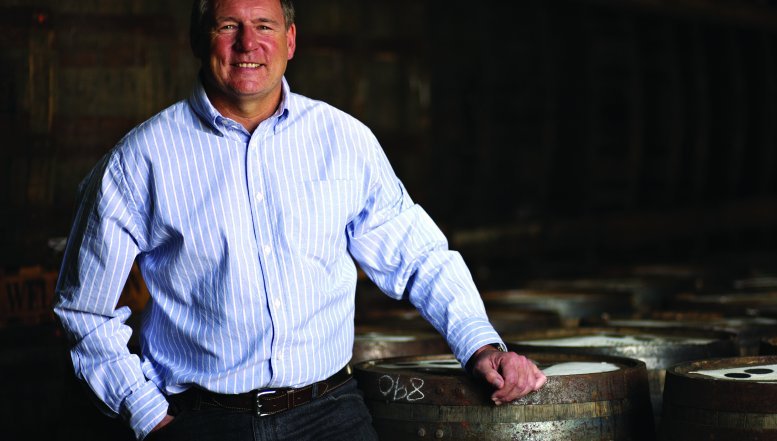 Bain’s was named the World’s Best Grain Whisky at the 2013 Whisky Awards, an accolade that surprised the international whisky industry, and delighted South Africans. Andy Watts, master distiller of Bain’s Cape Mountain Whisky and Three Ships whisky has been making headlines with his innovative approach to the art of whisky, as well as for the number of awards his whiskies have been receiving. Donald Makhafola caught up with him.

How did you develop a passion for whisky?

I spent time working in Scotland during the late 1980s and I was fortunate enough to meet and work with some of the most influential whisky leaders at the time – people with incredible passion for whisky. Their enthusiasm and love for making and enjoying whisky I brought back with me to South Africa.

Andy Watts, master distiller of Bain’s Cape Mountain Whisky and Three Ships whisky has been making headlines with his innovative approach to the art of whisky, as well as for the number of awards his whiskies.

What do you think makes whisky special comparing to other drinks?

Whisky is internationally recognisable. It remains aspirational and to some is a sign of their success, no matter how great or small. There is nothing that says that you have to either drink whisky or another spirit… that it has to be one or the other. Whisky does not demand that. Whisky encourages you to share, talk about it and even compare it with other drinks, knowing that you will return because your journey with whisky becomes a lifestyle.

As a whisky connoisseur, do certain brands stand out for you?

Brands are important to consumers and through the brand a trust and relationship is formed. However, you must be careful to not become someone who “drinks with their eyes”. There are some very good whiskies out there that do not have the marketing budgets yet to be the “big” brand, but that does not mean they should not be tried. I honestly do not believe that there is just one whisky that should be consumed, no matter how big the brand. Whisky is very subjective and therefore personal. It is what you like that matters. Don’t be afraid to step off the beaten path and try the lesser known brands because the best part of enjoying whisky is exploring the enormous variety out there and discovering some extraordinary whiskies along the way.

What is the best way to enjoy whisky?

When we taste whisky we advise people to add the same amount of water to the glass as the whisky. The water must not be too cold and definitely no ice. This allows the flavours of the whisky to be revealed during the tasting. However, when we drink whisky we say that there is no right or wrong way. The South African climate is relatively hot so a long glass filled with ice, a tot of whisky along with ginger ale and a slice of lemon or orange makes for a great summer cooler. On the other hand, a cold, wet winter’s evening may lead to a more complex whisky with just a dash of water. Do not be afraid to experiment to try to find a whisky, whether neat or mixed, which suits the occasion best.

There is a new trend of pairing beers, brandies and whiskies with food. What meal would you pair together with Bain’s whisky?

I have been fortunate to work with some exceptional chefs over the last year, preparing food and whisky evenings. Not one of them was disappointing and each chef delivered something new. The natural sweet flavours of vanilla, toffee, and subtle spice blends Bain’s to be paired with Cajun style seafood, tandoori chicken with mint, mild curries and even traditional dishes like babotie. As a side snack we have also found that sweet chilli cashew nuts and even wasabi nuts are complimentary.

Bain’s is the first South African grain whisky to be voted the best in the world. What’s your secret?

There is no real secret – just 31 people who are committed and passionate about what they do. The success which we have consistently achieved over the last few years just fires the motivation to maintain this standard. The distillery itself is a 24/7 operation and to keep it functional has its own challenges. That’s why although a few of us may make the decisions regarding the whisky itself, without the unsung heroes behind the scenes we would not be able to do that.

As the master distiller of Bain’s, what does this recognition mean to you?

The fact that there is recognition for our whiskies shows me that we are on the right path. This recognition lets everyone connected with our brands feel proud. It fuels our passion to continue to craft whiskies which we hope, one day, will make all South Africans as proud of the whiskies we produce as we already are of our incredible wines and brandies for which the country is better known.

When the news was announced, did it come as a surprise?

I was fortunate to be at the awards ceremony in London and, to be honest, it was a total surprise. The feeling was one of extreme satisfaction but at the same time the realisation that our whiskies were being taken seriously! This award as 2013’s World’s Best Grain Whisky comes from a very intense selection process done through blind tastings. The forum of tasters is internationally recognised and respected whisky experts, connoisseurs and enthusiasts. To have such an award bestowed upon you by your peers is a very humbling experience. The attention which these awards are bringing to South African whisky-making is amazing and although consumers tend to be very reserved about the fact that South Africa can make good whisky, these awards will continue to help us slowly break down those perceptions.

Personally, what is a favourite South African whisky?

When asking the question about your favourite of anything you will probably find your answer is related back to an event or experience. Mine is no different…When I spent time in Scotland I was also fortunate enough to spend an extended period at the Bowmore Distillery on the Isle of Islay off the west coast of Scotland. This is a small island which is home to eight operational whisky distilleries and during my time there I fell in love with the island, its people, but more importantly, it’s very distinctive and smoky whiskies. When I returned to South Africa and was appointed manager of the James Sedgwick Distillery one of our first projects was to create a whisky which reminded me of Islay and its whiskies. Three Ships 5 Year Old Premium Select was born and it remains my favourite to this day.

How is Bain’s performing in the local market since it has been announced the best in the world?

Bain’s is performing very well and meeting all of our expectations. It is still a relatively young brand, only being launched in 2009, and in a highly competitive market with shelf space at a premium. We are still working on the challenge of improving our distribution across all sectors. The award has definitely helped create an awareness of the whisky. With on-going tastings and activations across the country we are continually reaching new consumers; this is helping our marketing and sales teams take us to the next level.

Plans for the future?

At the moment whisky in South Africa and the world is in a good space which means that we will continually be upgrading and expanding the distillery over the next five to ten years. This is more than enough to keep me busy until retirement! However, we have always believed the time would come in South Africa, where we now are, where limited edition bottling, non-chill filtered whiskies, brand extensions, cask finishes, own cask sales and cask strength expressions are the trend. This is nothing that the established whisky producing-countries of the world haven’t been doing for a while.

My hope is that the innovative side of what we do here at the James Sedgwick Distillery will soon be released to the whisky-loving South African public. The “cherry on top of the cake” for me though would be the opening of the beautiful James Sedgwick Distillery to the public as a brand home – a marketing project which will hopefully be rolled out in the next couple of years.