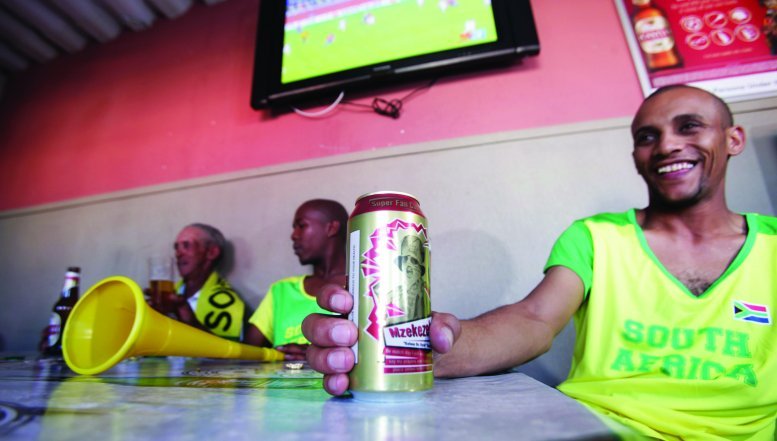 We know typical taverns or shebeens in townships as pretty run down establishments where customers sit on beer crates, consuming beer out of quart bottles and cut-off beer tins are used as ashtrays but there are a few exceptions.

Prior to the 2010 Fifa World Cup Tournament, the South African Brewery (SAB) launched an initiative called ‘Castle Kingdom’ aimed at transforming taverns and shebeens across the country through infrastructure upgrading to create “mini-super fan experiences”.

The Castle Kingdoms Initiative was part of SAB's R170 million investment to support South Africa's hosting of the 2010 Fifa World Cup event and the focus was to transform approximately 540 taverns and shebeens in 43 townships across the country to become bright, inviting and rejuvenated soccer-themed venues.

We know typical taverns or shebeens in townships as pretty run down establishments where customers sit on beer crates, consuming beer out of quart bottles and cut-off beer tins are used as ashtrays.

The experience gave consumers who were not able to attend the live games a place to watch the game and experience the atmosphere and energy of the tournament.  This experience was continued during the Premier Soccer League season, cricket and rugby activities throughout 2012.

SAB’s Azure Janneker says that in 2011 each Castle Kingdom received a full make-over; monthly promotional support which tied into the campaigns that Castle Lager had in the market at that time as well as the “watching the game” occasion with a big focus on the three national sporting codes that Castle Lager is sponsoring.

“In 2012 each Castle Kingdom received another refresher and will have a total of six on-site activations taking place over the course of the year. Five out of six activities are sports related, with a Brand Social Responsibility campaign focused on Soccer Development taking the forefront.

This campaign has a strong affiliation to the fact that Castle Lager has supported football for the last 55 years and has been the sponsor of Bafana Bafana for the last 20 years,” says Janneker.

Many owners whose taverns and shebeens have been transformed into Castle Kingdoms were overwhelmed saying the changes have done wonders for their businesses by attracting new customers. The usual crowds from around the vicinity of the tavern are also joined by others from further afield interested in knowing what the face-lift is all about.

Castel Kingdoms provide an open invitation to curious passers-by and SAB believes this will have a lasting legacy and long term benefits for tourism in townships. Castle Kingdom is clearly identifiable on approach.

The distinct colours of red, gold and white adorn the outside walls, creating a welcoming sight unlike the previously dusty surrounds of taverns. Innovative branded cocktail tables, not a feature often seen in taverns, gives the space a social jovial atmosphere and flat screen televisions hoisted up on walls create a perfect sport-feel environment for viewing matches.