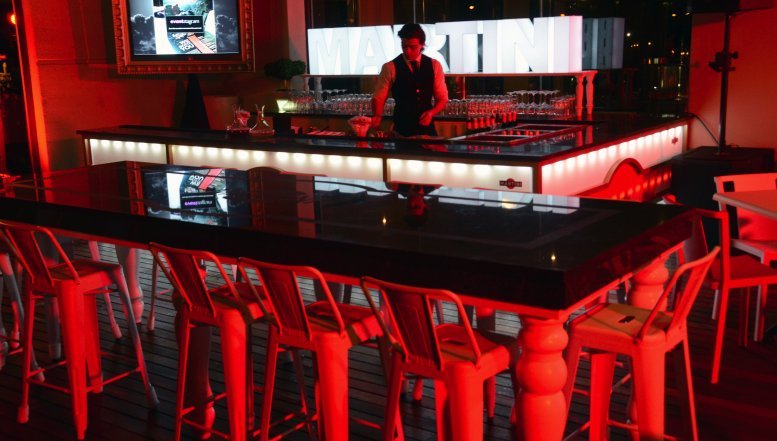 The exclusive opening of the new elegant cocktail lounge and lunch bar, Martini Terrraza at Metro Benmore in Sandton, marked the beginning of a new drinking experience within South Africa’s celebrity circle.

The idea of the international and iconic brand, Martini Terrazza, was born in Paris 150 years ago after the Rossi family had a vision that Martini lovers could congregate in unique places and locations around the world.  In the late 1950s that vision became reality in the form of Martini Terrazza.

The Martini Terrazza brand became established and was immediately a point of reference for the protagonists of intellectual circles and society, in the fields of literature, show business, science, sport or politics.

The exclusive opening of the new elegant cocktail lounge and lunch bar, Martini Terrraza at Metro Benmore in Sandton, marked the beginning of a new drinking experience within South Africa’s celebrity circle.

In their heyday, there were eight Martini Terrazzas, seven in Europe and one in South America. About half a century later, the tradition continues in Milan and at Pessione, with the same spirit and passion of the early days.

In 1948, the French subsidiary decided to open a hospitality lounge on the top floor of 52 Champs Elysées. The name, Martini Terrazza, was adopted only at the end of the 1950s. This Terrazza became renowned in the cinema and fashion world.

The Italian architect, Tomaso Buzzi was called in 1960 to decorate it. He had already decorated the Martini Terrazza in Milan, then Barcelona; and was due to work on London and Genoa.  The use of Buzzi was a uniform approach to ensure a common image in line with the company style.

This year, celebrating its 150th anniversary, Martini Terrazza at Metro Benmore Gardens, showcases a subtle marriage of urban chic and an exquisite boudoir aesthetic. The dark wooden finishes and low lighting entices the newcomer with an elegant bar and lounge seating.