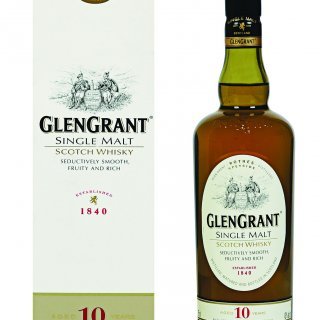 According to Murray, who tastes, evaluates and grades the 4 500 whiskies alone, this year’s 10-year-old has excelled to the point of “taking the breath away”. Having been described as one of the most consistent whiskies for a long time, he says it is obvious that Glen Grant’s very high quality ex-bourbon casks and uniquely crisp barley are “meeting with rare panache”.

Each whisky is scored in four key areas, namely nose, taste, finish and balance, and the Glen Grant 10-year-old achieved an impressive 95%. Murray says the whisky is “rich in colour” and “lingers with a soft, almond finish”.

Since the founding of Glen Grant in 1840, the distillery has been famous for its light, crisp whiskies, its history of innovation and tradition, and its beautiful buildings and gardens on the banks of the River Spey in north-eastern Scotland. The tall slender stills and purifiers, which were introduced by James “The Major” Grant over a century ago, continue to give the whiskies a distinctive fresh flavour and clean colour.

Interestingly, “The Major” was the first person in the Scottish Highlands to own a car and Glen Grant was the first distillery to have electric lights. In keeping with its pioneering past and progressive future, it is fitting that the Duke of Rothesay (more commonly known as HRH Prince Charles of Wales) recently opened the distillery’s state-of-the-art biomass plant and whisky-bottling centre.

Glen Grant is one of the largest-selling single malt whiskies in the world today. In South Africa, it is distributed by Edward Snell & Co. and is available at all leading liquor retail outlets. The recommended selling price for the Glen Grant 10-year-old (750ml) is R299.99.