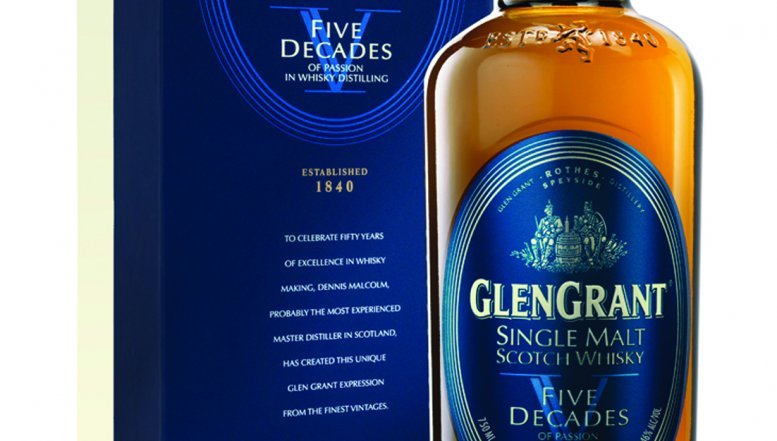 This unique multi-vintage combines Malcolm’s favourite hand-picked casks from the 60s, 70s, 80s, 90s and 2000s: it is mellow, rich single malt with a great complexity and depth.

Representing 50 years of knowledge and learning, Malcolm regards Five Decades as one of his greatest achievements. “It embodies key successes during my time at the distillery and in the whisky industry,” he says. “In this way, it’s the best of my best, and I hope whisky lovers savour the story of enduring craftsmanship that defines its unique character and taste.”

Curiosity and family history contributed to Malcolm’s choice of career. Growing up, he was fascinated by the fact that a cask could hold liquid without any glue. His father and grandfather worked at the distillery, where he was also born close to. Since March 1961, when he joined Glen Grant as a cooper’s apprentice, his commitment, creativity and passion have continued to grow. He has been responsible for developing a range of delicate, fruity and smooth expressions, namely The Major’s Reserve, 1992 Cellar Reserve and the distillery’s 170th Anniversary Limited Edition, as well as a 10-year-old and 16-year-old.

“On-going innovation shapes the Glen Grant experience,” says Malcolm. “In 1872, James ‘The Major’ Grant, the son of one of the founding brothers, completely changed the distilling process by adding special purifiers to create lighter, fruitier single malt. A radical move for his time, it set the scene for a pioneering ethos, which underpins everything we do today.”

The distillery’s state-of-the-art biomass plant is designed to recycle the waste from the whisky-making process as animal feed, and creates electricity by burning draff and woodchips. As one of the world’s leading single malt whiskies, the bottling centre produces 2 000 bottles every hour, mainly for export to Asia and Europe.

The Glen Grant Five Decades expression has a recommended selling price of R1 200.