And boost your profit

Cocktails don’t just look pretty. Many establishments shy away from serving cocktails because of two misconceptions: that the bar is too busy to make fancy drinks, and that your bartenders aren’t knowledgeable enough to mix them, says Emil den Dulk, Director at Liquidity, a company that specialises in the import and distribution of premium and super-premium wines and spirits.

So why aren’t these valid arguments? Let’s look at the definition of a cocktail.

In its simplest form, a cocktail is a drink mixed together from various alcoholic and non-alcoholic ingredients. That means that a gin and tonic can also be classified as a cocktail. Another simple example is the Screwdriver, which is essentially a vodka and orange juice.

A cocktail doesn’t have to be complicated to make, time-consuming or require specialised skills. These are some of the benefits of selling cocktails in a bar or tavern:

Many establishments shy away from serving cocktails because of two misconceptions: that the bar is too busy to make fancy drinks, and that your bartenders aren’t knowledgeable enough to mix them.

The sole purpose of a bar (or any business for that matter) is to generate and increase profit. The higher the quantity and price of products sold to a consumer in a bar, the better the opportunity to increase profit.
Given the amount of time any customer spends in the bar, it is the sole aim of the owner to try and extract as much value out of that customer as that time allows.

The higher the spending per head, the better. A customer should realistically (and responsibly) only drink a limited amount in one session. Therefore the key is to increase the value of each drink served to them. This is done through upselling.

An example is suggesting a super-premium drink instead of a house pour, such as selling single malt instead of an entry level blended whisky. The same goes for cocktails. By getting a consumer to drink a cocktail instead of a beer or spirit and mixer, you can double the Rand margin per drink without doing any extra work. By offering a jug of cocktails to a table instead of a single drink, you can quadruple the margin in the same space of time.

The Rand margin on most beers and spirits is often regulated by the average price of known brands and what a customer is prepared to pay for that brand. In the case of a cocktail, the brand name is removed and the profit margin becomes more flexible. Instead of gross profit margin, a successful bar should aim to sell more Rands per drink than percentage mark-up on a drink. The Rands made on a beer might be R6 a beer, however on a cocktail it could be R12 or more. Therefore it makes more sense to sell more cocktails than beer. 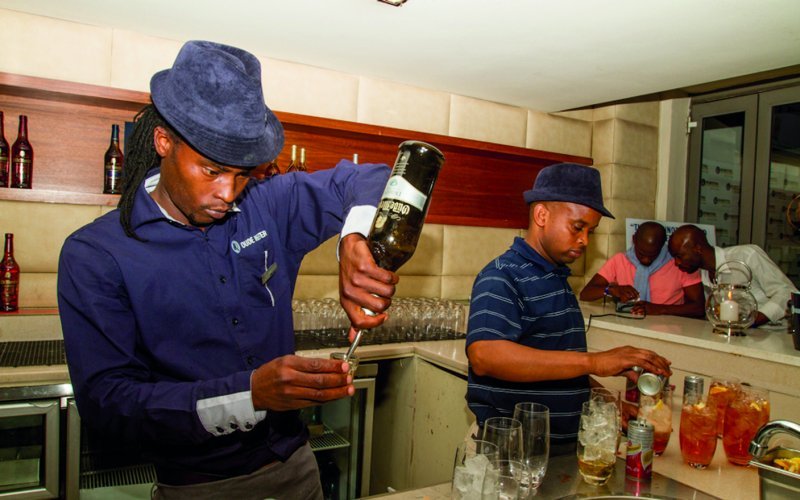 Depending on the type of cocktails served, time could actually be saved by serving cocktails as a volume offering. By offering a selection of cocktails by the jug, it reduces the amount of time a customer has to come to the bar, therefor reducing the workload. By offering a full bottle service or a jug, it also reduces the frequency a waiter is needed at the table therefore cutting out the usual waiting time between drinks orders. Jugs also become a better value for money proposition to the customer as the venue would offer it at a better price, making it more attractive to sell. Many of these types of cocktails can also be pre-made so that most of the parts are mixed before the bar opens. Upon order, the final components are put together and served very quickly.

Most bars have a wide range of products on the back shelf, of which only 20 percent gets used on a regular basis. Those bottles sitting on the back shelf are money waiting to be converted into profit. The longer they sit there, the more it costs the owner. By creating cocktails with those items, the owner has the opportunity to sell slow-moving items on the shelf, removing them from the selection and replacing them with items that could sell quicker.

A lot of bars complain that their staff does not have the knowledge, and that they are not willing to pay to train them due to the high staff turnover which the industry is synonymous with. What they do not realise is that any one of the liquor companies in South Africa is willing to train their staff at no or minimal cost. They are all more than willing to consult at no cost should a bar need help with creating drinks and printing menus. Specialised equipment is also not necessary as many cocktails can be made directly in the glass or jug it is going to be served in.

By asking your distributor to put you in touch with one of the liquor companies, a lot of the work can be done with minimal input. It is however up to the owner to implement the concept and stand behind the decision to make cocktails 100 percent. Without the absolute belief that it can make money, staff will not buy into the concept and the benefit will be lost. Management can ensure the success by simply focusing on a couple of key aspects:

This feature has been sponsored exclusively for Spotong by Liquidity. To get hold of Liquidity, call 021 905 9066 or visit them at www.liquidity.co.za.

Enjoy your beer safely and responsibly during lockdown

Enjoy your beer safely and responsibly during lockdown