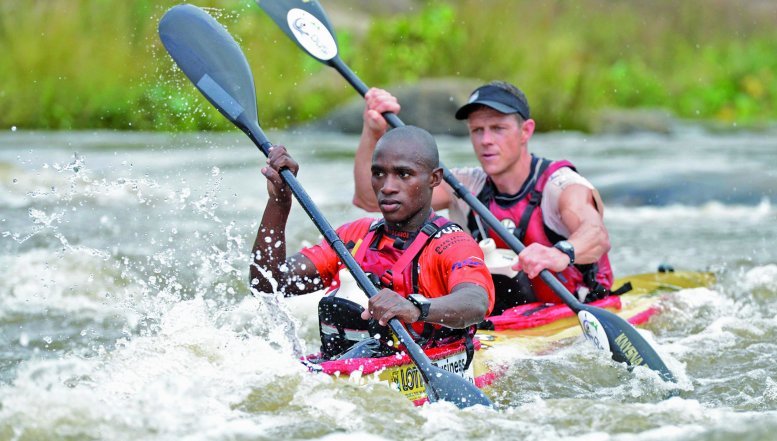 There was much celebration in Soweto as three home-grown paddlers brought home much sought-after Dusi Canoe Marathon gold medals. The unlikely crew pairing of Siseko Ntondini and Piers Cruickshanks finished an overall seventh in this year's Dusi Canoe Marathon, clinching gold medals for the pair.

This is newcomer Ntondini's first Dusi gold. The talented 19 year-old hails from Soweto and paddles for the Soweto Canoe and Recreation Club (SCARC). Cruickshanks, a South African marathon paddler veteran, who brought 15 years' experience of competitive paddling to the combination, took home his tenth Dusi gold medal. Fellow SCARC paddlers, Loveday Zondi and Thando Ngamlana, finished close behind in eighth position, resulting in a hat trick of Dusi golds for the club, and four for Gauteng.

Held over three days, from 13 to 15 February, paddlers from across South Africa competed in one of the world's ultimate canoe challenges. Dubbed the “Comrades of paddling”, this gruelling event covers 120km, with the entrants paddling and running (portaging) from Pietermaritzburg to Durban, through The Valley of a Thousand Hills down the uMsundusi and uMngeni Rivers.

There was much celebration in Soweto as three home-grown paddlers brought home much sought-after Dusi Canoe Marathon gold medals.

The water conditions have been described as “low-ish” on the first two days, making it tough going for the paddlers, which was reflected in the times, but on day three the water was high, thanks to a good release of water from the Inanda Dam.

“I am elated,” beams Ntondini. “It was tough out there, the unrelenting heat of the first two days continued into the third and final stage, but we kept it together finishing eighth on the first day, then upping our game to finish seventh on days two and three. We all know that in the Dusi, anything can happen, but we were well prepared both physically and mentally. I am still on a high!”

Cruickshanks adds: “We have been incredibly disciplined over the past year, and it has all paid off. I am incredibly proud of Siseko and our performance.”

Zondi and Ngamlana were equally effusive, saying they were proud to bring another two medals home to Soweto.

SCARC, was established over 10 years ago by ADreach CEO, Brad Fisher, with a vision of using water sports as the medium to engage with and provide development opportunities for underprivileged children in Soweto. Since 2003, it has become a platform that teaches underprivileged Soweto kids how to swim, participate in water sports, develop crucial life skills and become economically active.

“Everyone at SCARC is ecstatic that Siseko, Loveday and Thando have brought Dusi gold medals home to Soweto. They are prime examples of what can happen when sound development programmes are in place,” says Nkosi Mzolo, chairperson of SCARC. “We are delighted that canoeing as a whole has become a standout sport in terms of development, with many young black people getting involved in the sport and the number of black paddlers at the top increasing, as is exemplified in this year's Dusi results. SCARC was particularly thrilled to see Sbonelo Zondi become the second black winner of this unique event, following in the footsteps of Thulani Mbanjwa, who claimed the honours in 2008.”