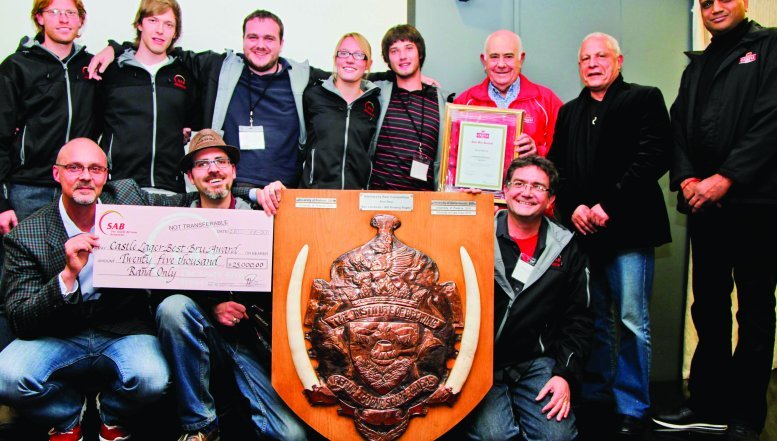 The University of Pretoria was the overall winner of this year’s South African Brewery Intervarsity Beer Brewing Challenge.

They beat 2012 defending champions, the University of Cape Town, which was this year presented with the award for Best Speciality Beer.

“The overall winning lager was very closely contested and the judges debated it for a while. The University of Pretoria’s Black Forest lager was the best balanced beer, which was not over the top, had no major faults and was perfectly to style,” said Chris Roth of Warthog Brewers, independent and accredited beer tasters.

The University of Pretoria has proven to be a winning team over much of the existence of the SAB Intervarsity Challenge, having brewed the best beer overall in 2008, 2010 and 2011.

“We looked very specifically at the criteria used for judging. We brewed against these and focused on getting the process right, including quality control and checklists. We also have continuity in our brewing team which has helped us to grow from year to year,” said Carl Sandrock, University of Pretoria’s brewing team member and mentor.

While the concept of the brewing challenge was started in 2003, the first official SAB Intervarsity Beer Brewing Challenge was initiated in 2006 as a means of encouraging beer appreciation among students and to introduce prospective SAB employees to the business.

“SAB actively works at encouraging a beer culture in South Africa by supporting the local craft brewing industry. Our Intervarsity Brewing Challenge helps us drive the growth of this important industry at a tertiary level, as well as provide opportunities for students to become part of business,” says SAB Technical Services Manager Vimlan Moonsamy.

Moonsamy said that competition had grown exponentially with this year having the most entries than any other year since it began six years ago. A total of 35 brews were received this year. He added that the quality of entries had also greatly improved.

Participating universities each have their own micro-breweries where students brew, ferment, condition and package their beers prior to the final stages of the competition when they are tasted by independent and accredited craft beer tasters. “An independent and experienced tasting panel is paramount in judging the high quality of the closely contested beers,” said Moonsamy.

Each style category has specific tasting guidelines as set by the Beer Judge Certification Program (BJCP). Most beer styles are not defined by a single beer and many styles are broad, encompassing multiple stylistically accurate variants.

The University of Pretoria was the overall winner of this year’s South African Brewery Intervarsity Beer Brewing Challenge.