Taverns to experience over the holiday season!

Co-owned by Phumzile Ratladi and her three younger siblings Marcia, Zanele and Hector, in a great location of Meadowlands, this tavern is a winner.

The layout and decoration is quite stylish and upmarket. This review was done on an early Friday afternoon, which is not the best time to judge a bar’s ambience, but there was quite a pleasant atmosphere to carry decent conversations. Smoking is allowed outside, which was a huge high-five for us. The service proved to be pleasant and proactive. There are quite a few tap beers on offer, too, but Spotong was particularly excited about the soothing sounds being played in the background, as well as the vibe created by patrons.

Once again our Spotong team were out and about sampling the best taverns Soweto has to offer and as would be expected they were not disappointed!

We sat down with Phumzile and she told us about beginning her entrepreneurial journey at the tender age of 14 years, selling various snacks and fruits – particularly home-grown peaches from her grandmother’s garden. She unfolded an interesting story of how she packaged and sold the peaches, which were her main source of income. Years went by and the business grew. Ratladi began distributing fizzy drinks and a few years before she began the liquor business, she bought a kombi to transport school children.

In 2014, Spotong ran a competition for a R20 000 tavern makeover with Mageu. Phumzile was the lucky recipient of this prize. In the last year, she used her winnings to renovate her tavern and add on a special VIP area, and has incorporated a chesa nyama area. She showed off the new tavern upgrades during our visit. She has brought in new fridges, colourful handmade funky designer chairs, a ventilated smoking area, and a glass sliding door to lock warmth in the eating area on cold days. There is also brand-new signage outside to ensure she stands out from the rest. Spotong magazine and Mageu traditional drink are very proud to have been involved in this process of making one tavern owner’s dream come true.

We highly recommend Sister-Sister’s Tavern for drinks if you’re looking for a change of scenery in Meadowlands. The place gets absolutely packed on Friday evenings, so it might be worth giving it a go on a week night if you’re seeking a calm atmosphere. However, with prices this good, we wouldn’t be surprised if it is full most nights.

Sister-Sister’s is super easy to locate and is literally about five minutes away from the main road. We definitely recommend visiting to lounge and chat, or maybe to start off your night of dancing. 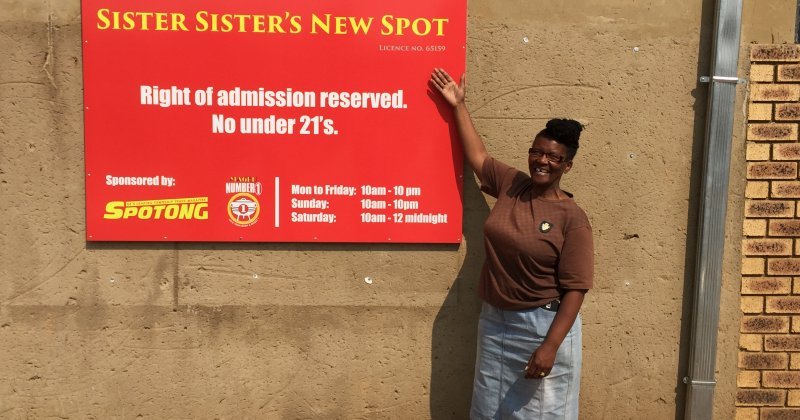 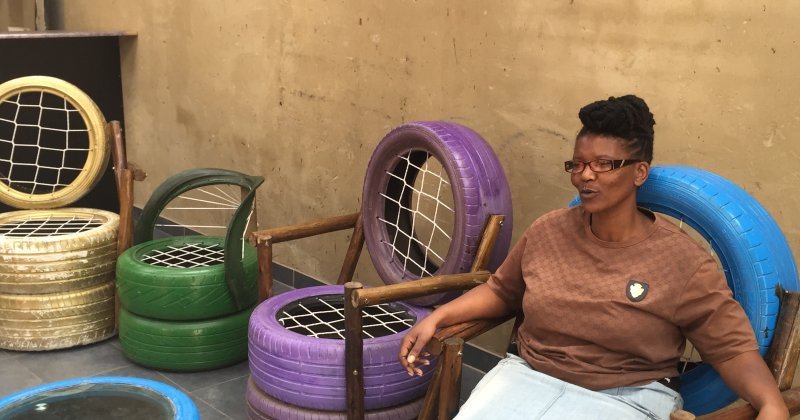 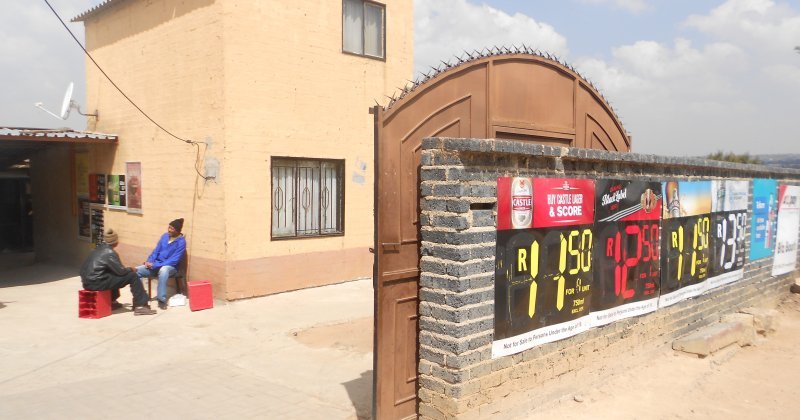 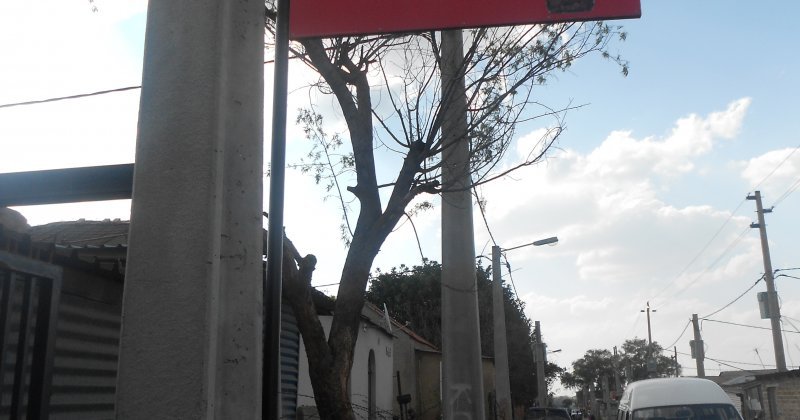 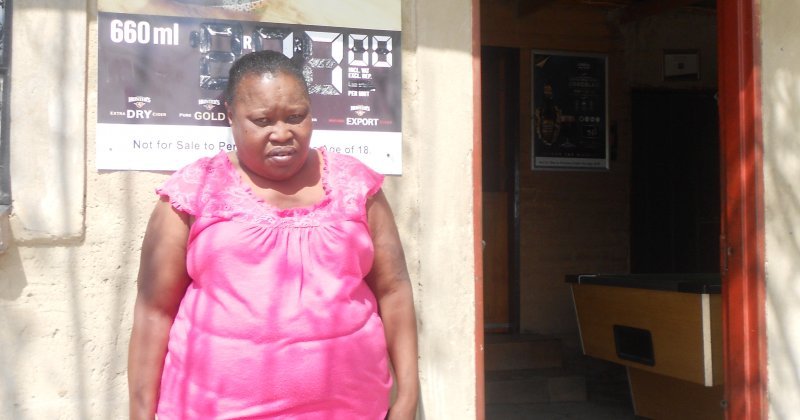 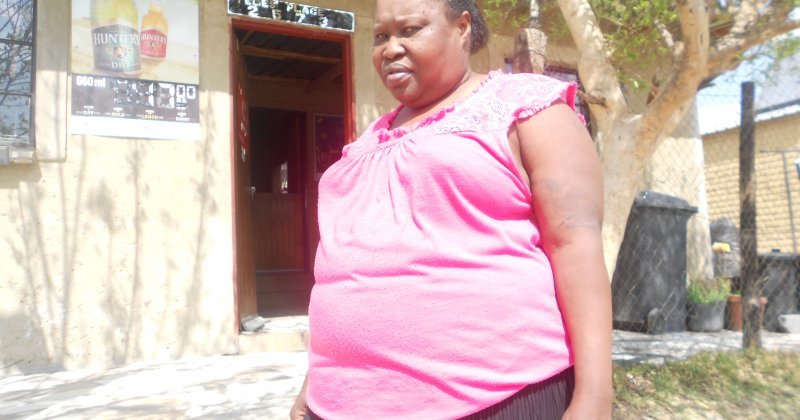 Good stop for a local check-in.

Getting in and out of the area was a bit confusing, as the tavern is surrounded by a number of tricky streets, but once you’re in the locality, the place is easy to spot. This is definitely one of our favourite spots in Ext 08, Far East Bank, and it also has reasonably priced drinks.

Tele’s has a relaxed vibe, but at the same time still retains its Kasi feel. It is a good place to go for a relatively inexpensive bite and drinks, and is a lot bigger than it seems from the outside. The bar area is a decent size and there are a fair number of tables spread across different areas, including a small outdoor set-up. A full table service was provided for us, which we found a pleasant gesture.

Tele’s does not have a very big beer selection, but you hardly notice this because of her outstanding signature dish. Owner Pinky Selahla sells traditional cow hooves that are a good size and very fresh. Not only is the dish fantastic, but the prices are fairly decent for a local tavern.

Pinky is part of the Responsible African Food and Beverage Association (RAFBEA), which has assisted in the running of the business. Pinky started operating in 2005, and Tele’s is now starting to diversify its offerings to locals – there is nothing like a combination of excellent food and affordable drinks.

Our first impression was a good one. The crowd of 13 who we found there were mostly locals and were a bit older – just the right shebeen crowd, with no youngsters, which was a pleasant change.

This is the perfect spot for an afternoon beer or two. We might give it another shot sometime in the future.

A gem of a find inside Alex.

We love places like these. Thandi’s is a great place to go if you want to sit and chat. We visited on a Thursday afternoon and it was not crowded. We honestly can’t think of a better way to beat the heat than finding an outdoor spot at a local shebeen and drinking an ice-cold, freshly poured beer.

The two owners, Sam and Thandi Radebe, were incredibly nice. With the place undergoing a name change soon, they are a genuinely collaborative pair. The name change will make quite a difference – it is changing from a tavern to a shebeen. It makes a lot of sense, as it caters for a more mature clientele. Thandi’s is quite a nice spot that is not too crowded, nor loud, nor expensive – an excellent find!

We chatted with Sam, who reminisced about how it all started back in 1963. He spoke of a number of misfortunes along the way, but he still managed to carry on. Sam spoke of how he started as a distributor of sorghum beer, and only later started liquor trading. “There were, however, several unpleasant setbacks because of the political uprising that took place between 1976 and 1994.”

In any case, we really liked the low-key vibe of this place, and would like to go back with a bunch of friends to chill on a weekend. It is a great place to be, and we couldn’t fault a thing. We were pleasantly surprised by the service from both the bar and wait staff – they were friendly and quick to offer us drinks.

We’d definitely be willing to give Thandi’s another go sometime down the line. The menu has a decent selection of drinks and everything is very reasonably priced. Definitely worth a visit.

We love it this pozzie! With great staff, decor, music, drinkies, atmosphere, ambience – it’s got it all.

Walking inside, the feeling was quite intriguing – there was something particularly special about the place, despite the fact that it’s a standard-looking pub with a handful of tables and chairs scattered throughout the joint and a chill area on the side.

Harry Grant started his establishment in November 2010, after he finally decided to utilise the permit he obtained four years earlier in 2006. In 2007, he joined RAFBEA, which is an association aimed at part of the greater Alexandra township. He spoke of the impact the association has had on his business since he joined, saying: “The association serves as a pillar in the running of the day-to-day business.”

As much as the community of 130 River Park, Alexandra is a no-crime zone, Bra Harry still sticks to the operational hours recommended to him by the association. He is open on Sundays and Thursdays 10am until 10pm, while on Fridays and Saturdays Grant’s Tavern is open from 10am until 12am. The establishment does not serve anything other than liquor. It has shied away from serving food, as it proved not to be a best seller. The vibe and atmosphere here was very comfortable and friendly.

In short, this is amazingly authentic spot for a hang-out, and is also centrally located. Residents of River Park are definitely spoilt for choice, but this place is our best bet. We left happy!