By the age of five, Phumlaphi Rita Zwane was selling amagwinya (vetkoek) to Umlazi commuters, and sweets to her peers. Little did the world know then it was a sign of things to come. It was the birth of an entrepreneur extraordinaire.

Rita is the youngest daughter of a single mother who worked as a domestic worker in KZN. The family’s financial resources were limited, but their drive to seize opportunities grew out of a determination to overcome the limits of an unequal society.

Shortly after matriculating, in 1987 Rita moved to Johannesburg, where she hustled to survive. She used every opportunity to elevate herself, doing a secretarial course, getting a formal job, and outsourcing her car as a delivery vehicle to a courier company, turning the liability of car payments into an income-earning asset.

Her formative working years in the food and beverage industry drove her belief that she could forge a new sector in the industry.

Her formative working years in the food and beverage industry drove her belief that she could forge a new sector in the industry. Her vision was to create a place where African people could enjoy traditional braai meat and celebrate their culture and heritage in an environment of style, class, and dignity.

In 1997 she founded Imbizo Shisanyama on a dusty street in Ivory Park, with only a single two-litre pot, gas griller, display fridge, gas paraffin stove and two employees. In 2002, Rita placed another container at the corner of Main and 29 September Roads, in Extension 1 Ebony Park, exactly where BUSY CORNER is situated today.

Imbizo Shisanyama BUSY CORNER grew explosively and inspired the creation of hundreds of Shisanyamas around the country, offering sustainable employment to thousands of South Africans and in fact changing the entire landscape of the food and beverage industry.

Currently with the new Imbizo Shisanyama open in Midrand CBD Rita supports over 150 families from the local community, employing them as car guards, braai masters, and women who make the salsa, chakalaka, and dumplings that patrons enjoy. In June 2016, she established the Bambanani Community Upliftment Campaign, feeding more than 400 children that pass Imbizo Shisanyama on their way to school every day.

Conquering the Poverty of the Mind is for every aspiring entrepreneur, it teaches valuable life lessons and inspires one to take the first step and to seize every opportunity that life presents.

In 2012 Rita was appointed as a youth ambassador for the National Youth Development Agency (NYDA) and launched the Imbizo Shisanyama Bursary Programme for those wanting to pursue a career in the dynamic food, beverage, and hospitality sector. In 2016 she became an advisory board member and coach to entrepreneurship challenge participants for youth leadership & entrepreneurship development.

Rita has received many accolades along the way: 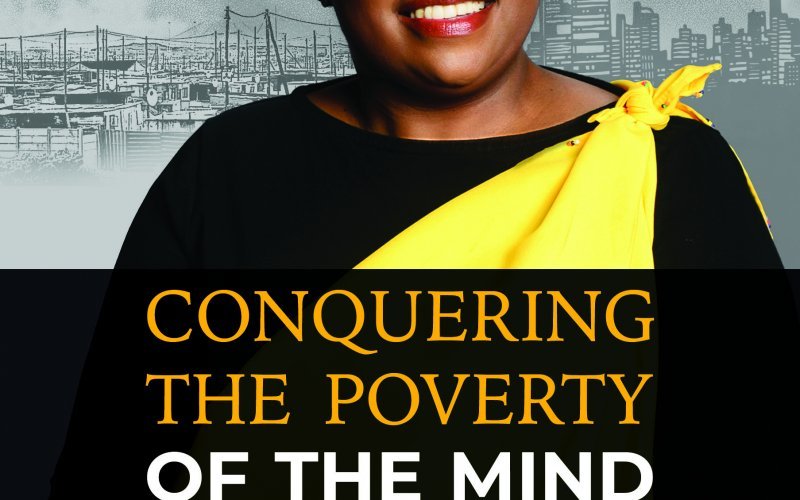 • In 2012, she was appointed by the National Youth Development Agency (NYDA) as an ambassador for its Ithubalentsha Micro Enterprises initiative.

• In 2013, Rita was awarded the National Small Business Champion Award by the NSBC.

• In 2015, the establishment was the first runner-up in the AfricaGrowth Institute SMME awards (in the Services Sector category).

• For her commitment and dedication to the advancement of her community, Rita received the welfare’s caregivers award in 2015 bestowed on her by the Department of Social Development.

• Paying tribute to Rita’s journey to success and perseverance, the South African Chamber of Commerce and Industry (SACCI) awarded her the 2016 Business Woman of the Year title.

• International recognition was awarded to Rita in 2016 when she was nominated at the Socrates Awards for the Golden European Award for Quality and Business Prestige.

• In 2017 Rita was nominated for the Premier Service Excellence award for the Gauteng Province.

Extract from Chapter 12 – Open for Business

"As the first patrons walked in, I felt like a little girl on her first day at school, eyes wide to gauge the patrons’ reactions. Some walked slowly around the restaurant, stopping at the braai master area to inhale as the fresh meat was thrown on the grill, and I could see the hungry pleasure in their eyes. Then they paused at the different seating areas, and I followed behind them, trying to experience it through their eyes. I could immediately sense the feeling of going home that they experienced as they smelled the sharp, sweet, damp aroma of fresh thatch and the fresh gum poles, as they admired the shiny, black slate and polished concrete floors, the beautiful white ceramic tiles, the fridges, and the stainless steel trays in the butchery. Everything looked fresh and attested to my mission to create a world-class establishment with style and dignity in a township.

"The soft furnishings in the restaurant had been chosen deliberately and with great care, from the materials to the colour palette, advised by Walter and Nelson. On the tables in the front of the butchery area I had gone with Walter’s suggestion that we use a cordoba or burgundy colour, which is a good colour because the deep red shades stimulate appetite, but also because I immediately saw its cultural symbolism. It is not only the same colour as aged meat; it is also the colour of the ububende, which is a blood broth, a traditional Zulu dish enjoyed at traditional ceremonies. The tablecloths in the main fine dining area were white with a rich burnt sienna overlay. The colour palette of the restaurant reminded one of the earth – symbolising the strong tie that African people have to their land, their roots, and their cultures. That early in the morning, the people who arrived were mostly curious Ebony Park residents coming to appreciate the new restaurant in their midst. And even though not everyone sat down to have a meal, as soon as they walked out of the door, they whipped out their phones and started telling their friends and family about MaZwane’s Imbizo Shisanyama at Busy Corner, which gave me such a thrill. Then, towards lunchtime, as I looked out through the opening in the side of the restaurant, I saw taxis snaking so far down the road I could not see where the queue ended. Patrons weaved their way through the parking lot that was filled with cars, and once inside the restaurant they squeezed into any available space to order their meals. Watching the first meal being served was so gratifying. I had been very particular with all the venue’s details, and I had been just as exacting with the menu and plating of the various dishes. In keeping with the authenticity and style that I wanted to create, the type of plate I had in mind was very specific. It had to resonate with my customers, and months and months were spent calling on catering suppliers to seek out the right plate – the exact right plate. At one stage it seemed that the only available plates were white porcelain or stainless steel, which weren’t in keeping with the experience I wanted to create. In the rural areas, homesteaders use heavy cast iron pots, and I wanted, in some way, to offer the same feel, though not the three-legged pots because I couldn’t display the meals the way I had envisaged in a pot. I had to have a plate. Just when I had almost given up hope of finding anything suitable, and felt disappointed at having to settle for a plain plate, I managed to source the exact right one, a perfectly-sized cast iron plate.

"Ukosa (braai) is the single most common practice that carries the history of all South Africans. After much menu planning, we arrived at the Shisanyama Original Braai Mix Platter of chicken wings and drumsticks, lamb chops, short rib, and a neat roll of thin MaZwane Wors, and they all fitted perfectly on the plate. We served meals with steamed dumplings, bowls of spinach and finely grained mealiepap whipped to lightness, and sides of salsa and my own chakalaka mix. I watched as the waitrons brought the first plates to the tables, and in the oohs and ahs expressing admiration, I knew our menu choices and the platters were a hit. We had indeed achieved the ultimate braai experience. Buoyed by the patrons’ pleasure, I was able to get stuck in as more patrons began to arrive, and got lost in the excitement of the bustle. The queue of people choosing their meat from a display fridge snaked around the restaurant from four o’clock the afternoon until late evening at around ten o’clock."

Conquering the Poverty of the Mind – MaZwane's Story: From Shipping Container to BUSY CORNER. The Entrepreneurial Journey of the Shisanyama Pioneer by Rita Zwane and Isabella Morris is published by Tracey McDonald Publishers and available in all good bookstores at around R260.

We have two copies to give away to two lucky readers. To stand a chance of winning, email your name, address and contact numbers to info@spotongmag.co.za